Conversion Engineering versus "Discipline of the Secret"

Last week we were scheduled to have a special all-school-lecture here at Wyoming Catholic College by a visiting professor from Colorado College.

Dr. Timothy Fuller, who was to present on his new study “St. Augustine’s Importance in His Time and Ours.” was unable to come, but the even continued with our president Dr. Glenn Arberry giving his lecture instead with discussions following by a panel of professors.


The subject, by the above title was of society at a cultural crossroads, both on our time and in Augustine's, and his philosophical thinking of moving a society that had been pagan for a thousand years into a new Christian mindset and philosophy. The "importance" to our time of the title, however illustrates, however, how we are unfortunately moving in the opposite direction. Cultural understanding of ourselves and our lineage has progressed from thoughts of Christendom, to Western Civilization, to a "first-world", to a now globalist and relativist trust in a "United Nations".


In contrast to St. Augustine's work in developing the philosophy to move from paganism in the social world to Christianity, much of the modern world and popular culture is moving in the opposite direction, from recognition and abiding with Christian roots of the culture, to a pantheistic worldview, one I have previously argued is not true culture by its discontinuity, but nevertheless, a common expression of such a self-focused, relativist belief is now spreading. We are as Fuller's expressed in the position of the pagan Romans who saw their beliefs, customs, and philosophy challenged by a new system, and tried to respond to such an apprehension. Unlike the pagan Romans, however, we have Christ, Divine Revelation, and the faith, but we are still are in a relatable position.


Both the modern time and that of Augustine were periods of uncertainty and confusion. Bridging the gap between the pagan Roman culture and his Catholic faith was the goal of Augustine, and although  we as a nation/world are unfortunately moving in the opposite direction, his work is important and relevant to the present. This was the primary argument of our lecture, but most interesting to me was a follow up question made to a faculty panel that followed the lecture. In answer to the question of whether the so-called "project" of Augustine, his philosophical work of bridging a cultural gap, must necessarily be in reverse for the present situation and what that would mean for Catholics in the modern world.

Our Theology professor Dr. Lasnoski responded by historically describing how past Catholic expression of the faith in the pantheist, pre-Constantine time was open, yes, but reserved in an almost mysterious way. This, the "discipline of the secret" was not always a discipline or rule, but a guideline in the early church as it lived among a pagan, anti-Catholic society. Of course evangelization, or as I have termed it conversion engineering is a positive and good thing, but there is a contradictory problem and idea that Dr. Lasnoski brought up to us by this terminology. Has the holy been so demystified in the world, the faith so present in the world that is ignored?

The faith again, should be spread and preached, but in a "secular" culture as Matthew 7:6 states, it is often better to keep the truths and life of the faith separate from the profane, to live it mysteriously.

You must not give that which is holy to dogs. Do not cast your pearls before swine, or the swine may trample them under foot, and then turn on you and tear you to pieces.

Now I am neither saying, however, that faith should be a full on cult, a mystery religion, but, there is  a mysterious element to the faith and the holy. To Dr. Lasnoski, if the faith is too popular and people convert for that popularity, the faith becomes deprecated, a problem at St. Augustine's time, as many converted out of political or financial reasons. Many can think they know the Church, having seen it as a non-Catholic from many angles and for a long time, but they have really not experienced deeply , only in a superficial way that removes the sense of the holy, blinding one into a deadened view of the Faith.

Giving too much of the Faith away before one is ready can deaden their response to it, and the early Christian "discipline of the secret" was to prevent such an outcome while preventing the doctrines of the Faith from being put to evil use as the Catholic Encyclopedia via New Advent summarizes.

A theological term used to express the custom which prevailed in the earliest ages of the Church, by which the knowledge of the more intimate mysteries of the Christian religion was carefully kept from the heathen and even from those who were undergoing instruction in the Faith... On the contrary all Christians were taught the whole truth, there was no esoteric doctrine, but they were brought to full knowledge slowly, and precautions were taken, as was very necessary, to prevent heathens from learning anything of which they might make an evil use.

In the modern age the Church is so accessible and open that many, again, can know all about the Church without any commitment. We in America are not yet in a society anywhere near that of the pantheistic Romans, at least officially, but the suggestion from Lasnoki is that as popular society moves away from the faith, the Faith must be held closer, tighter, and more reservedly. If the world around us as was the case before Augustine, is not of the Faith and knows little of it, conversion cannot come best through showering doctrine upon such who are unformed, but rather by the mystique and draw of the Faith.

We are ignoring the deepness and richness of the Faith if we see it as a light thing, as if of no consequence one can enter or leave it. In its depths, the Faith requires that one be "brought to full knowledge slowly" and also by its depths the Faith requires a separation from one's past, but as St. Augustine tried to preserve, a bridge from one's past, however, from his life-long love of being a Roman, to the Church. A separation AND a bridge must somehow be found then in our situation that opposes Augustine's, between the popular culture that increasingly surrounds us and the Faith.

One must be different from the culture around them in order to stand out from it, but must do so narrowly so as to entice others by a hint of the truth, so that they may properly approach the Faith for itself, and not out of ulterior motives. As was also brought up by Dr. Lasnoski, this leads to a dichotomy between one abandoning the crumbling society around us, or actively fighting it so as to rebuild into a better one, a question he thought himself unable to answer, and one I also struggle with, but a point is left the same either way, one can use the cultural realities as a bridge to their understanding of the Faith, but there must also be a divide between the one's past thinking, as in the case of Augustine and what threatens to consume our thinking in the modern conception if there be anything to our faith, it must change us. 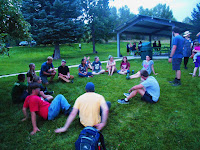 This means separation from the world yet presence within it, a bridge to draw people from it, but not to be changed and defined it. Here's a great summary of the suggestion, of how to live this dichotomy between separation and a bridge.

As Dr. Jared Staudt states in the above article, describing the popular term for this idea, the Benedict Option:

Rather, we need to form intentional communities that more fully embody our Christian faith and in which we are willing to face the consequences of going against the stream.

We need according to him to form "intentional communities", to restore and maintain practice of the faith and culture, while being open in a way to bring people in to culture and the Faith.

This is the point of my title "Conversion Engineering versus "Discipline of the Secret" ", Conversion Engineering or direct evangelization can only go so far in a world ill-prepared for Christ. Rather, Catholic Outposts, communities returning in a radical way to Christ and the Faith, is the answer on a base level to how we must respond to the uncertainty and decline we see around us.